Her Heart in Hackettstown

Her Heart is in Hackettstown—and at Centenary University 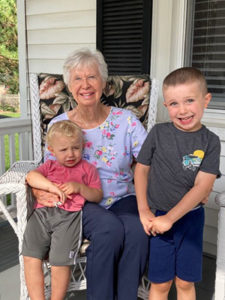 HACKETTSTOWN, NJ, Oct. 13, 2020—As they prepared for their Centenary University graduation, the Class of 1950 adopted the motto, “Not to make a living, but to nobly make a life.” Gloria Blake Kehler ’50 has done just that, living right across the street from the campus she called home as a commuter student for two years, when the University operated as a college for women.

“I’ve seen Centenary grow from a small junior college to a University,” mused Kehler, who still walks across the street to campus often. “I’ve seen big changes over the years, including the type of students who come to Centenary. It’s very diversified now, which is a good thing.”

Born on nearby Schooley’s Mountain, Kehler was the youngest of four children. Both of her parents were deaf and her mother was mute. While it was difficult at times, she recalled, “They were wonderful parents.” During high school, she set her sights on higher education, but knew it would be tough for her family to afford. “I always knew that I wanted to go to college, but I didn’t see it as a possibility at the time,” said Kehler, the first in her family to attend college. “When I became a senior in high school, I became a little more determined.”

Like many of today’s Centenary students, Kehler worked her way through college, juggling classes with jobs in the bursar’s and admissions offices, the switchboard, and at the deli counter of the local Grand Union market. After graduation, she married Richard Kehler, a successful insurance salesman. She devoted herself to raising the couple’s six children, all of whom attended college. Today, the couple also have 11 grandchildren and 13 great-grandchildren. As a teenager, Kehler was a cheerleader—the only sport open to women at the time. Later, she and her husband stayed active playing tennis, golfing, and downhill skiing, switching to cross country skiing when downhill became a challenge.

Kehler’s stately Hackettstown home, now shared with one of her grandsons and his family, is a duplex once used as a Centenary dormitory. She recalled that a professor and his family lived on one side of the duplex, with students and a “dorm mother” occupying the other side. In a throwback to those collegial days, all of the bedrooms in the home still have individual sinks, installed for the convenience of students who shared a bathroom and shower.

While walking across campus this summer, Centenary University President Bruce Murphy, Ed.D., noticed Kehler sitting on a bench reading. He walked over to introduce himself, discovering that she was an alumna. Since the COVID-19 pandemic had prevented the Class of 1950 from returning to campus for their 70th reunion, Dr. Murphy invited Kehler to visit the Edward W. Seay Administration Building for some socially distanced reminiscing. At the time, she shared memories of former First Lady Eleanor Roosevelt coming to speak at Centenary: “I remember her car driving up to the front portico of this building. I was quite impressed.”

In honor of her class, Dr. Murphy presented Kehler with a presidential coin, custom engraved with her name and the words “nobly make a life”. “That’s exactly what you did,” Dr. Murphy said. Fondly recalling classmates and her years as a Centenary student, Kehler said, “Centenary broadened my view of the whole world. I think it made me a better person and a better mother.”

Founded in 1867 by the Newark Conference of the United Methodist Church, Centenary University’s academic program integrates a solid liberal arts foundation with a strong career orientation. This mix provides an educational experience that prepares students to succeed in the increasingly global and interdependent world. The University’s main campus is located in Hackettstown, N.J., with its equestrian facility in Washington Township. The Centenary University School of Professional Studies offers degree programs in Parsippany, as well as online and at corporate sites throughout New Jersey.